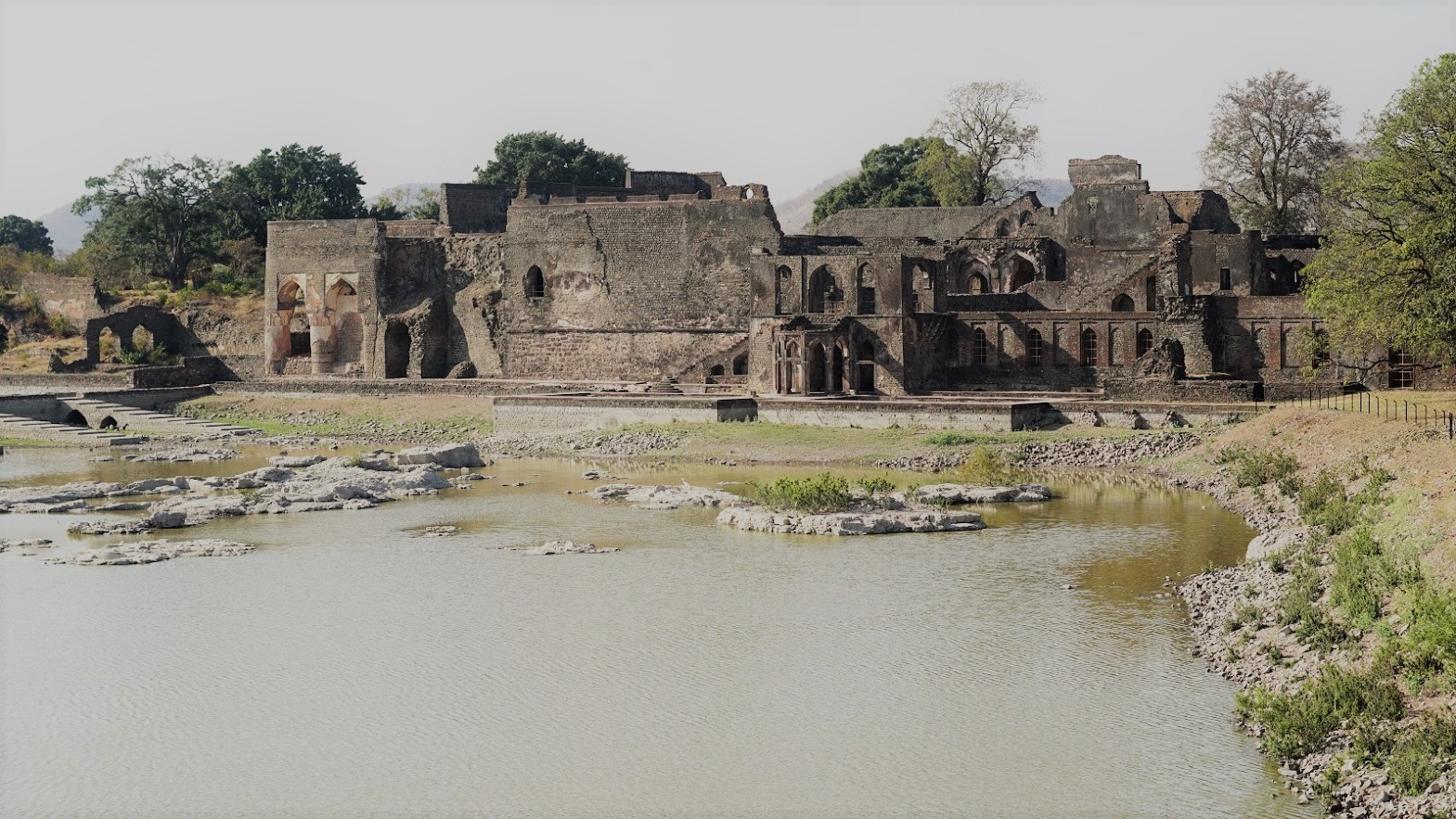 Located in the arid plans of the Malwa region of western Madhya Pradesh the town of Mandu remains cut-off from any major settlements, wrapped in its on world of history, legends and architectural ruins. Situated in present day Madau of the Dhar district Mandu gets its name from the Mandapa durg 9or fort) built here in the 6th century. Mandu is for the one’s that seek the roads less travelled- a mostly undiscovered slice of rich architectectural heritage. The small settlement is strewn with ruins and relics of the bygone era accompanied by errie looking baobab trees. The history of Mandu dates back to the 6th century when it was first established by Munjadeva. It city was briefly ruled by the Paramaras, a Rajput clan whereafter it was taken over by Muslim invaders in theth century and was declared the capital of the Malwa kingdom The area of Mandu is conveniently small and all the sites within walking distance. The sparsely populated area with its ruined forts and palaces strewn with baobab trees creates a rare and haunting ambience of mystic rarely found elsewhere. 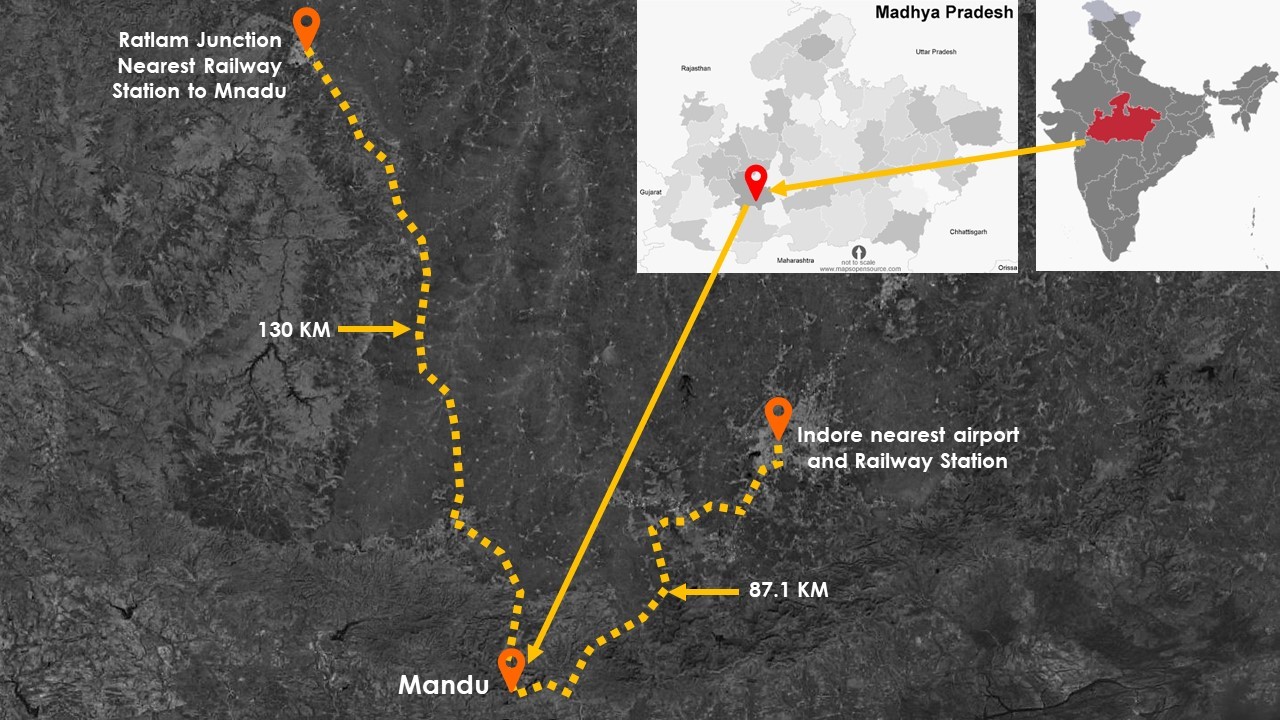 BY AIR- The nearest airport is at Indore, 99 km away. Regular flights connect Indore with Delhi, Mumbai, Gwalior and Bhopal.

BY TRAIN- Ratlam is the nearest railhead (124 km) on the Delhi-Mumbai main line. Ratlam is a major station and almost all trains stop at the station.

BY ROAD- Mandu is connected with other cities by a good road network. Regular bus services connect Mandu with Dhar (35 km), Indore, Ratlam, Ujjain  and Bhopal (285 km via Indore). 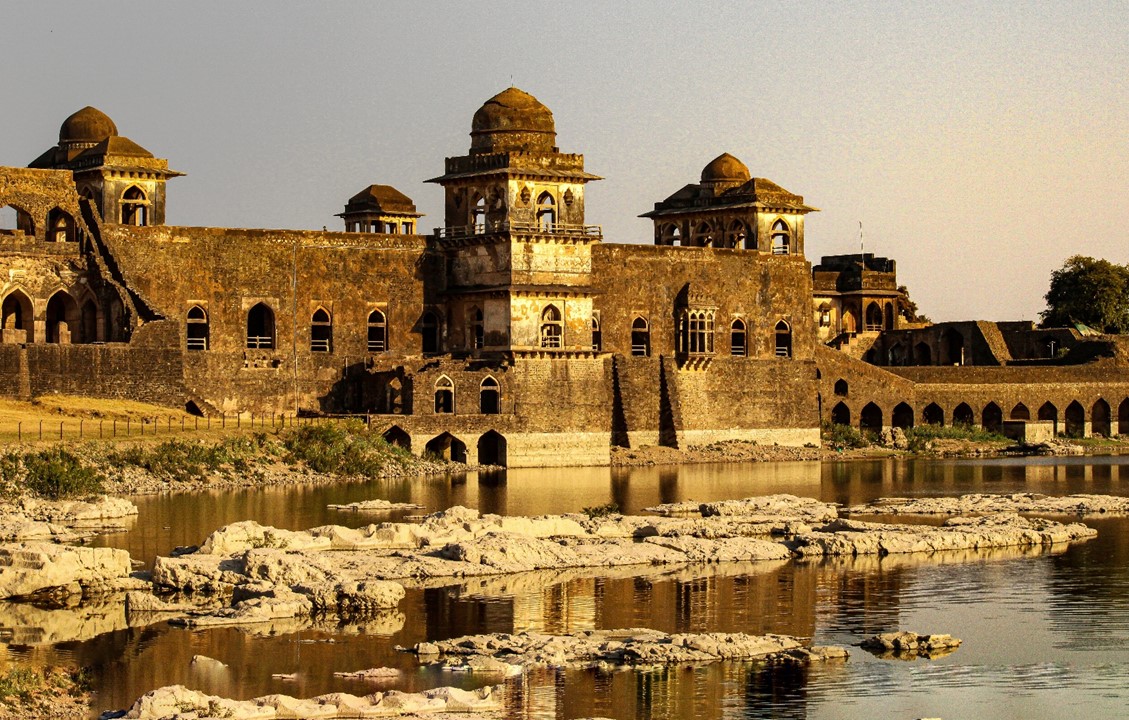 Jahaj Mahal / Ship Palace - situated between two artificial lakes, these two storied architectural marvels is so named as it appears as a ship floating in water. Built by Sultan Ghiyas-ud-din-Khilji, it served as a harem (about 15000 women) for the sultan. He ruled over Mandu for 31 years and was believed to be the pleasure seeker who gave emphasis to women and songs in his ruling life. An elongated building measuring 110 meters in length and only 15 meters in breadth it stands on a narrow stretch of land with two water bodies on either side, thus giving it a ship like appearance, hence the name Jahaz Mahal or Ship Palace. 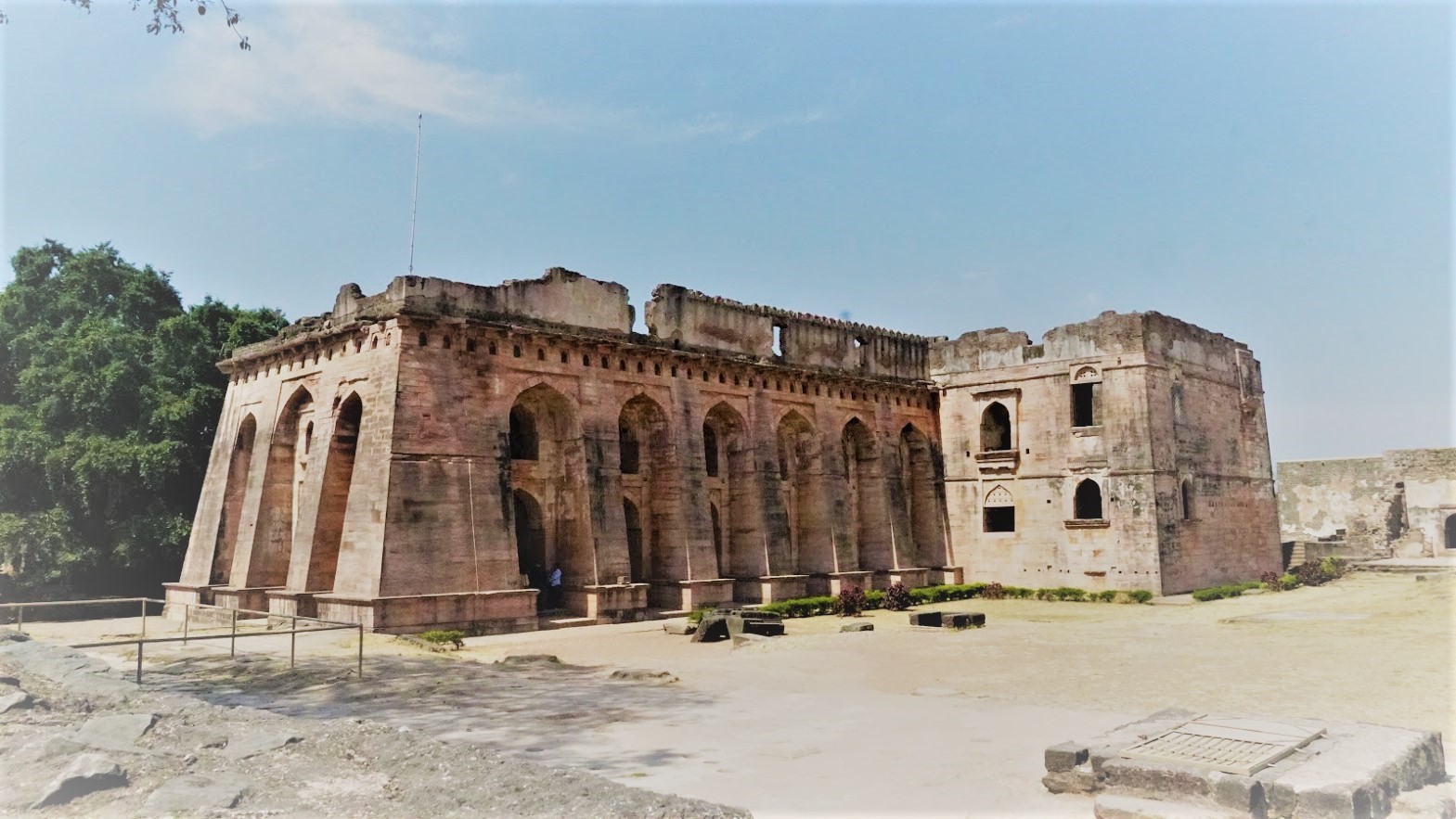 The Hindola Mahal (English translation: “Swinging Palace”), is a large meeting hall, or durbar,. The Hindola Mahal might have been constructed during the reign of Hoshang Shah about 1425 C.E. but may date to the end of the 15th century during the reign of Ghiyas-al-Din. Its lateral walls are 3 metres (9.8 feet) thick and further reinforced by massive inclined buttresses that angle over 77 degrees. The interior is a large hall with 5 transverse pointed arches supporting the flat roof. The Hindola Mahal represents the characteristic elements of the architectural style of the Malwa period (1400–1550): simplicity, boldness, and well-proportioned. In addition, the pointed arches on the building’s interior reflect how Malwa architecture was influenced by the Delhi styles. 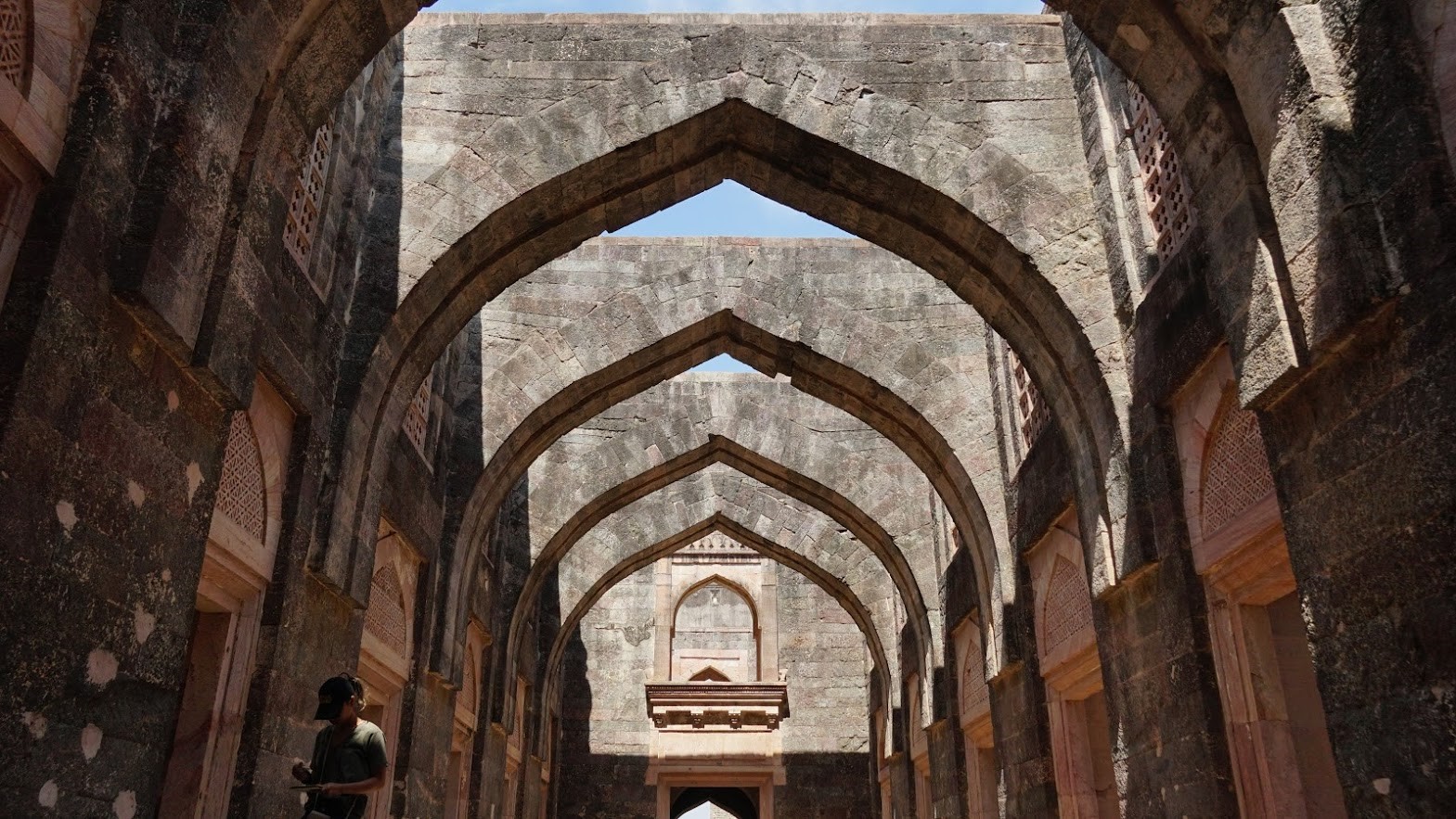 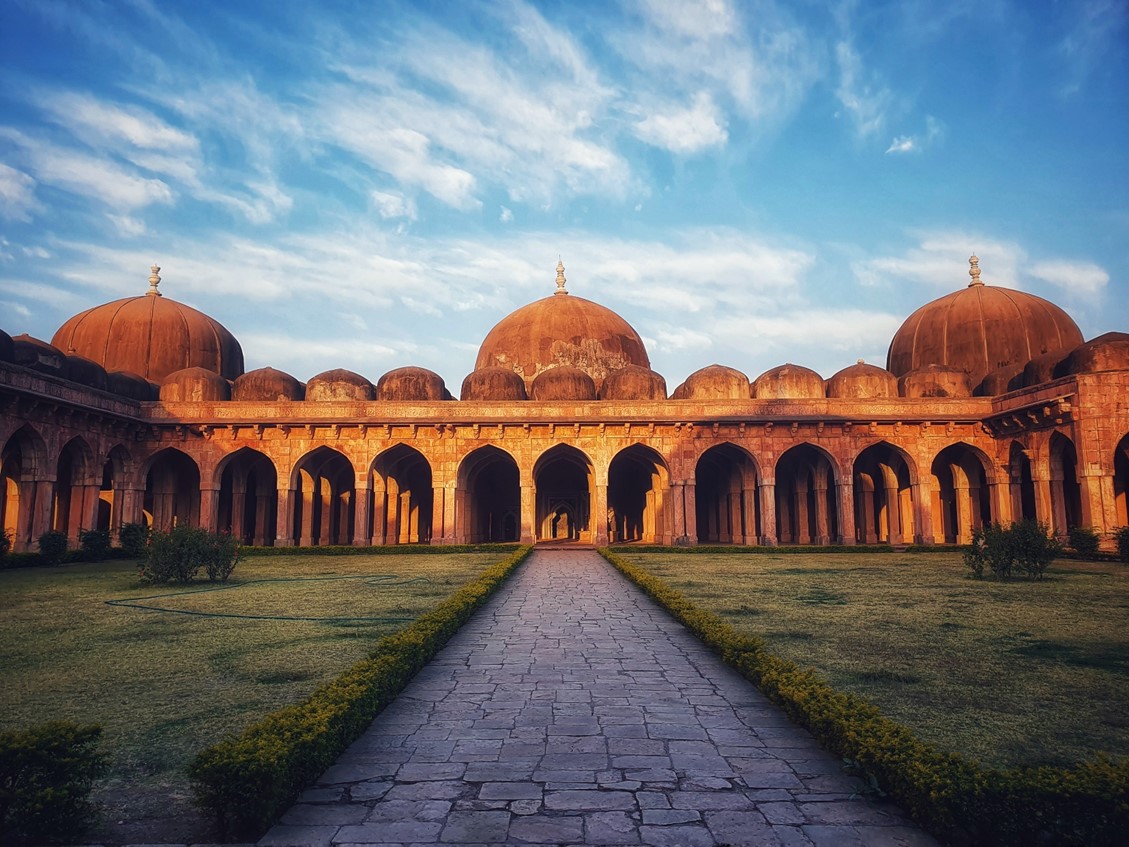 exhibits elements of Mughal style of architecture. The Mosque is built on a high plinth covering a total area of 88 sq meter. The main entrance is on the eastern side with two other subsidiary entrances to the north, one for the priests and the other a private entrance for the zenana. The roof of the mosque is lined with rounded cupolas with 3 large domes crowning the roof of the western sanctuary.

The Jami Masjid Ashrafi Mahal and Hoshang shah tomb is located adjacent to one another. Located right beside the Jami Masjid the tomb constructed in honor of Hoshang Shah who holds a significant position in the history of India. Built in the in the 15th century it was India’s first marble tomb and it was this particular tomb with well-balanced dome with convolute that would later inspire the creation of the taj Mahal later on. The quadrangular structure is mounted on a plinth and is decorated with a large marble dome that is centrally placed.

The Ashrafi Mahal was built as a madrasa (Islamic college) by Hoshang Shah between 1405 and 1422. . Mahmud Khilji of the following dynasty converted the northwest tower into a seven-storey victory tower and roofed the courtyard as a platform for his own grand marble tomb. Tomb and tower have vanished, but you can climb a grand staircase and walk around the roof. The structure in its present day mostly stands in ruins however in its initial days the structure is composed of three distinct buildings built at different times. Upon completion, Ashrafi Mahal covered a square of 320 feet side.

The Rani roopmati Pavilion and the Bazbahadur Palace 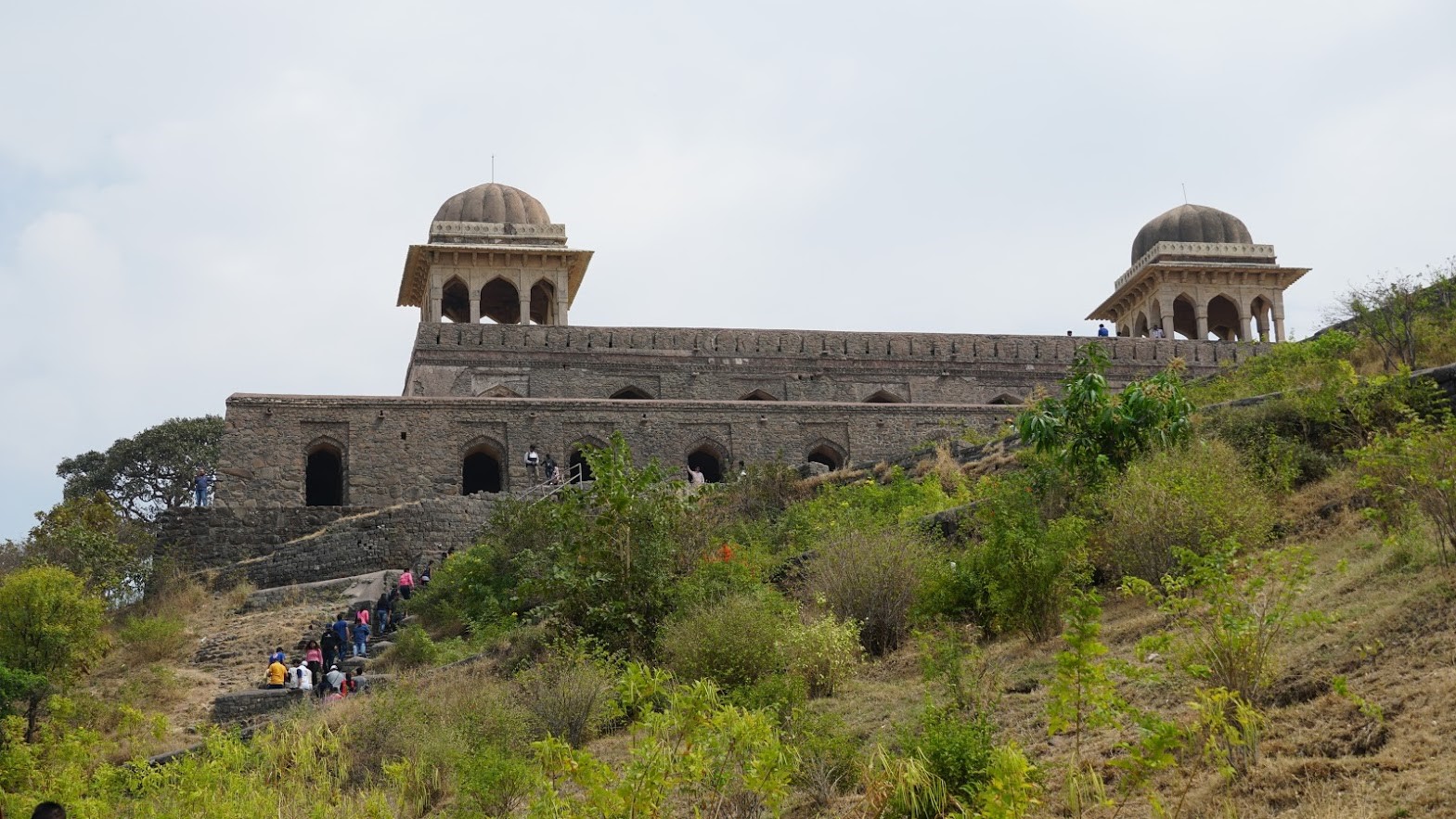 The two palaces had been the setting of the legendary yet tragic love story of king Bazbahadur and his queen Roopmati. Rani Roopmati’s Pavilion bears witness to the love story between Queen Roopmati and Baz Bahadur. It was on one of his hunting excursions that Baz Bahadur got attracted to the mellifluous tunes of Roopmati, then a simple Hindu peasant girl. Love blossomed among them and she was brought to Mandu by the sultan on the condition that she would stay in such a place as to be able to view her paramour’s palace as well as the flowing Narmada. Thus, began the love story between the two, though it ended tragically due to the intrusion of Adham Khan, a general of Mughal Emperor Akbar, who was attracted by the beauty of Roopmati. However, the queen died a self-inflicted slow poisoned death, unable to bear such mental trauma. Rani Roopmati’s Mahal was situated atop the hill overlooking the city of mandu, this pavilion was added so that the rani could view the river narmada each day. It is evident that the monument underwent construction in phases during different time periods. The original design, sans pavilions, was built as an observation post for the royal army as a low, large hall with a pair of rooms on each side and a heavy sloping base.

The basement of the pavilion is characterized by corridors that have several arched openings along their width. The western ledge has a large reservoir from which rainwater collected during the monsoons would be channeled from the roof of the structure to a tank below by means of conduits.  The bazbahadur palace is located at the foot of the hill a short distance away from the pavilion the palace terrace is further adorned with a couple of chhatris or elevated domed pavilions. One of the big rooms, that even today has astounding natural acoustics, served as the music and dance hall of the palace. 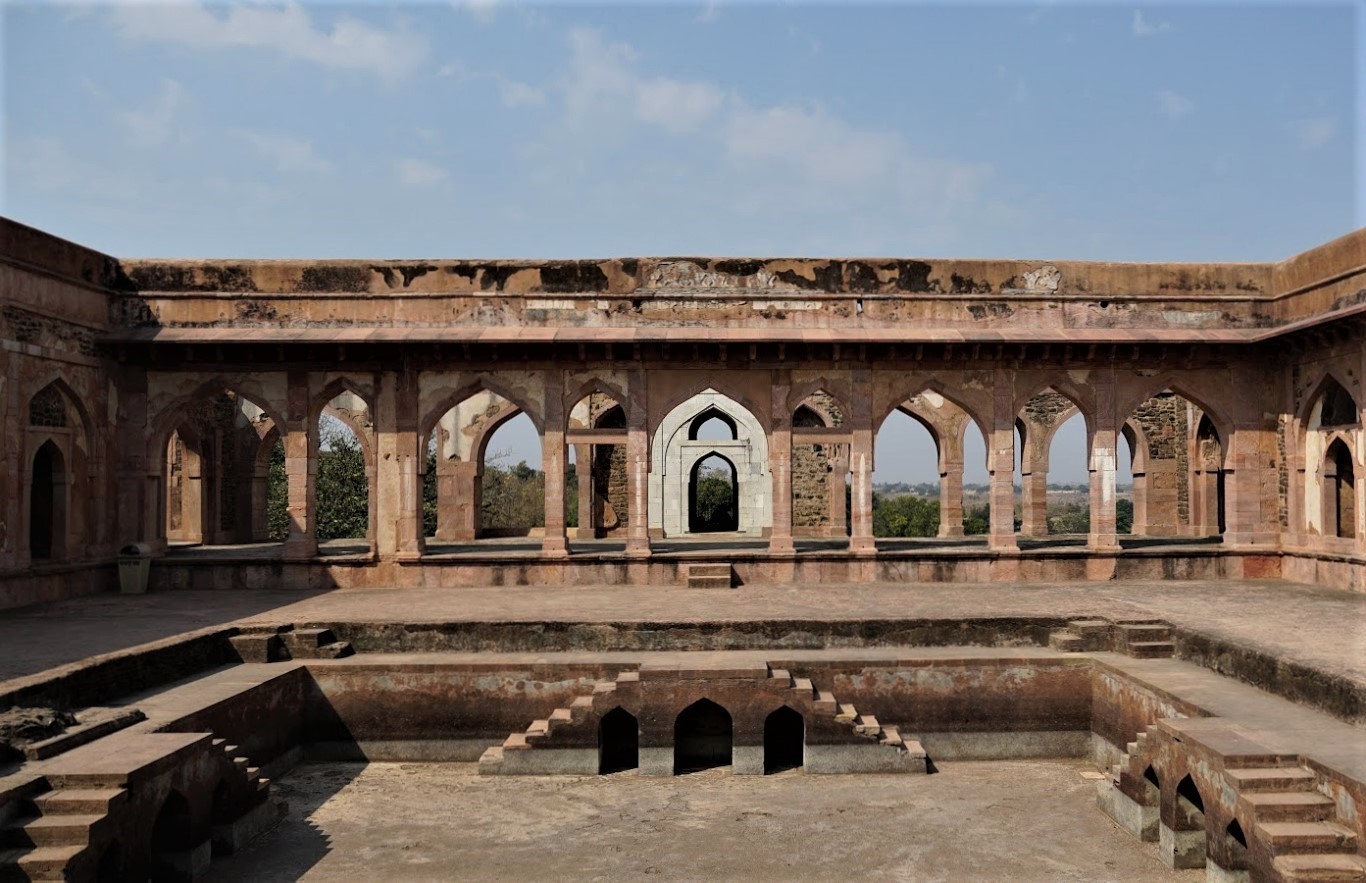 Dhrubani is the youngest member of explorArchi. She contributes as an Academic Officer and guides the students before and during the excursions.